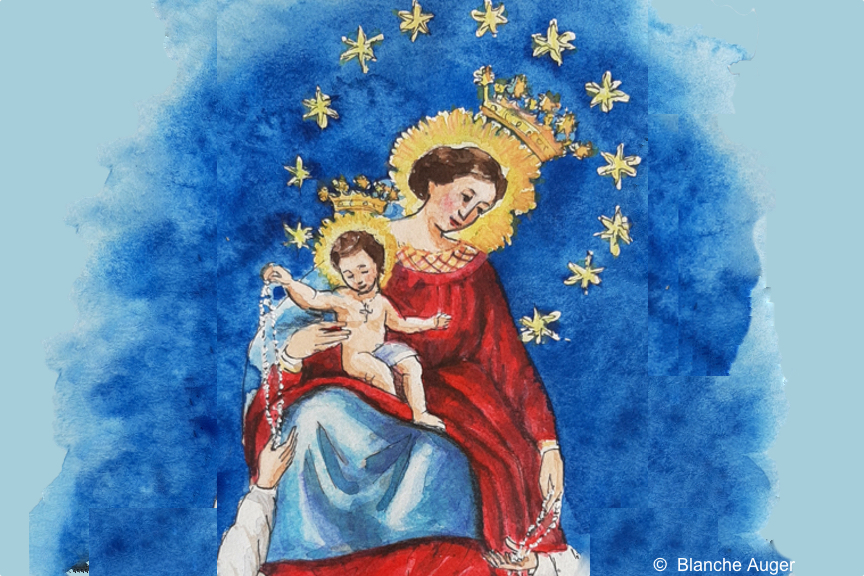 “Anyone who propagates the Rosary will be saved!”

This extraordinary promise is addressed
to those who help to spread the Rosary!

Where did this promise come from?

It was given by a celestial voice to Blessed Bartolo Longo who was saved, in extre-mis, from Hell. Here is the story of this amazing promise.

In Naples, in the 19th century, young Bartolo Longo was a brilliant lawyer and much admired. Soon, despite his Christian education, he fell into a terrifying trap. He was lured by a group of young people who practiced spiritualism. They lured him in by telling him that they would “show him a place where God exists.” Victim of the lie that mixed the true with the false and of his pride, Bartolo let himself be dragged into debauchery, spinning tables and satanic masses. He openly displayed a violent rage against the Church. During his occult initiation, he had experiences so terrifying that they damaged his health forever. Exhausted, prey to incessant hallucinations, he felt that he was going mad.

One day, a radical event happened to tear Bartolo away from the darkness. Thanks to his mother’s fervent prayer and that of one of his teachers, Bartolo went to con-fession, after hesitating for a year! When the priest saw this skinny, disheveled young man who seemed mad, he was uneasy and asked the sacristan to stay close by, just in case. He listened to Bartolo’s long confession and asked him to come back for absolution three days later. Faced with the enormous stakes of a possible conversion, the priest rushed to the neighboring nuns to ask them to pray intensely, and he also fasted for three days.

On the third day, on the feast of the Sacred Heart, Bartolo received absolution and regained his faith! Totally transformed in an instant, he became calm and peaceful. The extreme power of the Sacrament delivered him from the evil spirit that had tor-tured him day and night, and allowed the Holy Spirit to dwell within him instead.

Bartolo began to pray; he trained with the priest and studied Saint Thomas Aquinas for three years. He discovered the beauty and greatness of the Virgin Mary in God’s plan. He became an apostle: he walked along the streets of Naples with a large ro-sary in his hand and went into bars to talk about God.

Anyone who propagates the Rosary is saved

Bartolo wanted to repair the harm he had done. He remained tormented by the dark experience he had lived through. Thinking too often of his sin, he slipped from re-pentance to remorse and, little by little, he became overwhelmed with despair, to the point of being tempted to commit suicide.

One day, while he was in a remote area near Pompeii, the despair was so violent that Bartolo cried out to God with all his strength and he heard this answer: “Whoever propagates the Rosary is saved.” Immediately, an unimaginable peace flooded over him. From now on, everything became clear: he would dedicate his life to the Rosary!

Bartolo patiently began to evangelize this poor region, with little success at first be-cause the peasants were totally ignorant. He visited the sick, had images of Mary placed in the houses, and then organized a month-long mission of prayer and preaching. It was a successful start! Yet Bartolo remained very humble because he knew what he once was. He asked the bishop for permission to build an altar to Mary. The bishop came to see the place, saw the misery of the peasants, and pro-posed to build a church instead. Bartolo was hesitant because of the size of the pro-ject, but a sign from Heaven did convince him.

Young Clorinda was 12 years old, orphaned and suffering from terrible and painful epileptic seizures. Her aunt, Anna Maria Lucarella, took care of her like a mother, and had already taken her to see the best doctors of the time, even the doctor of the King of Italy and of Pope Leo XIII. But none of them succeeded in curing Clorinda. The attacks got more and more frequent and dangerous.

Bartolo heard about Clorinda’s suffering and joined his fervent prayer to beg for the girl’s healing. He asked the Virgin Mary for a sign, in order to know if he should build this church for her.

On the morning of the ninth day, Clorinda woke up and ran to her aunt; she knew immediately that Clorinda was healed. “Mama, Mama, I am healed; Our Lady deliv-ered me from my illness!” Her healing was confirmed by the prestigious doctors she had previously consulted. Bartolo had obtained an extraordinary sign! He now knew that the shrine he was going to build for Our Lady of the Rosary in Pompeii would be blessed!

How to Obtain Miracles

Amazingly, after the sanctuary was built, it was never empty and all the graces ob-tained there were beyond counting. One of these graces has been passed on, as it contains a revelation of the highest importance.

This revelation was made to Fortuna Agrelli, a woman who was so seriously ill that she had only a short time to live. One day she saw the Virgin Mary above her bed, in the appearance of Our Lady of Pompeii, seated on her throne with the Child Jesus on her lap and a Rosary in her hand. My child,” said Our Lady, “since you have called me under this title of Queen of the Rosary, I cannot refuse you the favor you have asked of me, for this name is dearer to me than all others. Do three more novenas and you will have everything.”

A month later, during a second apparition, Fortuna heard these words:

“Whoever wants to ask me for graces, let him devote three novenas to reciting the rosary, and another three novenas in gratitude for the graces received.“

At the end of the six novenas, Fortuna was totally healed!

In this same dynamic of faith, we invite you to say this Novena to Our Lady of Pompeii for the world.