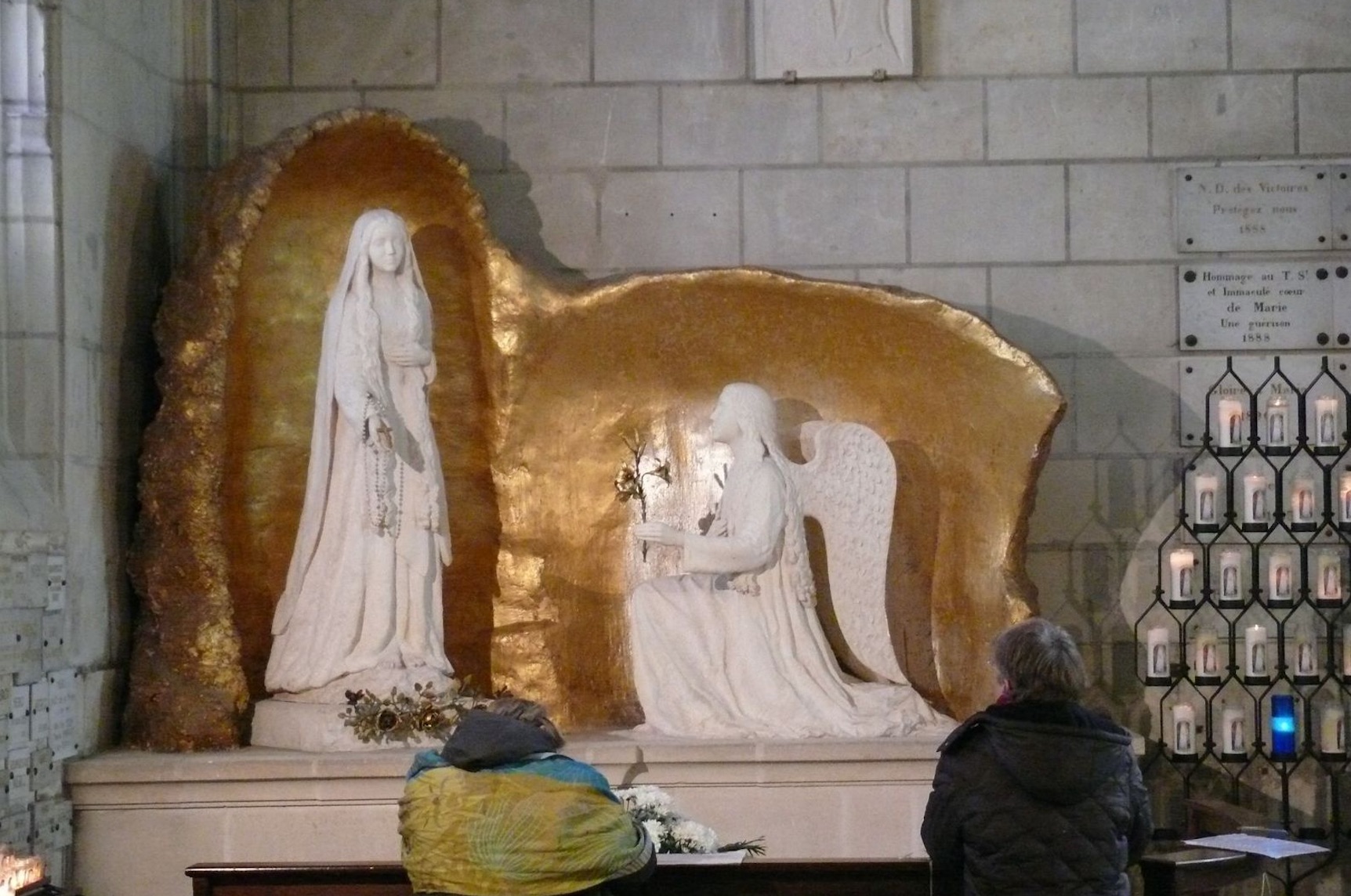 In December 1947, the whole of France was shaken by a very serious political and social crisis. Big strikes paralyzed the country, and there were riots in many cities, because the Communist Party tried to take the power. Civil war seemed imminent…

On December 8, in a small village of Touraine, Ile Bouchard, 3 girls were walking back to school. It was early afternoon. Jacqueline was 12 years old, her little sister, Jeanne, was 7 and their cousin Nicole 10 years old. Suddenly, Jacqueline remembered that the nun who taught them that morning told them that today was the feast of the Immaculate Conception of the Virgin Mary, and that they should honor her in a special way, and also pray to her for France.

So the girls decided to go into the village church for a few moments before going to school. They knelt at the altar of the Blessed Virgin and began to pray the Rosary.

Suddenly, at the fourth Hail Mary, they saw on their left a great light in the middle of which stood a beautiful Lady, accompanied by an angel.  They cried out in wonder.  The Lady was so beautiful! She was dressed in a white dress with a blue belt, and a white veil showed her long blonde hair. She was very young, perhaps 16 or 17, but she was so majestic…

The girls were so impressed that they went out into the street to look for others. They found 15-year-old Sergine Croizon and her little sister Laura, and took them back to the church. The beautiful Lady was still there, with the angel, and Laura saw them right away. But Sergine, perhaps because she was too tall, did not see them. The girls knelt down, without taking their eyes off the marvelous vision, and prayed another decade. The beautiful Lady smiled at them, and then disappeared in kind of an aura of light.

You had a blurry vision

When they arrived at school, Jacqueline and the girls told their friends, as well as the headmistress, Sister Saint Léon, and the priest who was there. But he replied to Jacqueline: “You must have seen something blurry through your big glasses…”. However, he took care to question the four girls separately and they all said exactly the same thing.

Jacqueline then approached Sister Saint Léon and said to her:

– Oh dear Sister, if you knew how beautiful the Blessed Virgin was!

– Since she was so beautiful, if I were you, I would have stayed in church..

Jacqueline took this answer as an invitation to return and, as the bell rang and the students lined up, she discreetly led the other three girls towards the church.

Are you our Heavenly Mother?

As soon as they were on their knees, the beautiful Lady appeared to them again, together with the angel.

– Tell the little children to pray as France is in great need.

Then Jeanne and Laura, on Jacqueline’s advice, asked the Lady if she might not be our Heavenly Mother.

– Yes indeed, I am your Heavenly Mother ! the Lady replied, her face lighting up with a smile. Then she held out her right hand and said:

– Children, give me your hand, each in turn.

And the Lady placed a kiss on each of the four little hands before saying as she disappeared:

You must pray much for France in great danger

The next day, despite being ridiculed at home, the girls returned to church. Soon the Virgin Mary and the angel appeared to them. The beautiful Lady told them:

– Here, kiss the Cross of my Rosary.

Jacqueline and Nicole, standing on their tiptoes, managed to do it, but Jeanne and Laura were too small.  Jacqueline helped lift them up as high as arm’s length, without any effort. The Blessed Virgin then made, at the same time as they, a majestic and very slow sign of the Cross – a true prayer in itself. Then she said to them:

– My children, you must pray much for France because she is in great danger these days.

– Go tell the parish priest to bring the children and the crowd to pray.

After school, at 5:00 a.m., the girls quickly returned to the church where there was already the crowd that the Blessed Virgin wanted: about 20 children and as many adults. The beautiful Lady appeared and asked them to sing the Ave Maria. The girls did so with enthusiasm. After an intense moment of prayer, the Lady blessed all those present and then disappeared.

The next day, on December 10, 150 people accompanied the girls to the church. On the beautiful dress of the Lady, the children could read the word MAGNIFICAT written in brilliant letters. Jacqueline, at her mother’s suggestion, asked:

– Madam, do you want to perform a miracle so that everyone will believe?

– I have not come here to perform miracles, but to tell you to pray for France, which is in great danger these days. But tomorrow you will see clearly, and you will not wear glasses anymore. Come back to see me tomorrow at the same time.

Indeed it is true that she is coming down among us!

On that day, Thursday, December 11, Jacqueline woke up and immediately noticed that her eyes were no longer sealed shut as usual and that she could see perfectly well without her glasses. What a joy! She ran to show it to her mother who, since Jacqueline’s birth, tended to her eyes every morning. Ever since her birth, Jacqueline had incurable purulent conjunctivitis and severe myopia. And then, in one night, as the Blessed Virgin had announced, everything disappeared! Her parents wept with joy, and her father, who until then had been a non-believer, ran to find the parish priest. When the priest arrived, he looked into Jacqueline’s eyes and, very upset, exclaimed:

– Indeed, it’s true that she is coming down among us!

And from that day on, he attended all the following apparitions along with the children.

Go back to prayer

On the following days, the crowd kept increasing in the church, with many priests and also doctors observing the girls. Each time, the Virgin Mary asked that the Ave Maria be sung, and that the Rosary also be prayed.

Then she made this promise:

– There will be happiness in families.

Once again, she insisted that they should pray because France was in great danger. The prayer of the crowd became more intense, full of fervor as they felt the presence of the Blessed Virgin praying the Rosary with all of them.

On Sunday, December 14, for the last apparition, the church was packed with more than 2,000 people, not counting those outside. The Virgin Mary was more radiant than ever. She kissed the bouquets of flowers offered to her by the girls, then prayed the Rosary with the enthusiastic and emotional crowd. She asked that the last decade be prayed with arms in the form of a cross, which everyone did without hesitation.

At the end of the Rosary, Jacqueline asked:

– Before I leave,” the Lady replied, “I will send a bright ray of sunlight..

Even though that day was in the middle of winter and the sky was dark and cloudy, a dazzling ray of sunlight penetrated through a very small window, curving around the pillar and fanning out over the transfigured faces of the children. The flowers they held in their hands were sparkling so much that they seemed to be covered with diamonds! The crowd exclaimed “Oh!” in wonder.

The Lady looked lovingly at all those who had come there to pray to her, and then, after blessing them, she disappeared with the angel into a beautiful aura of light… 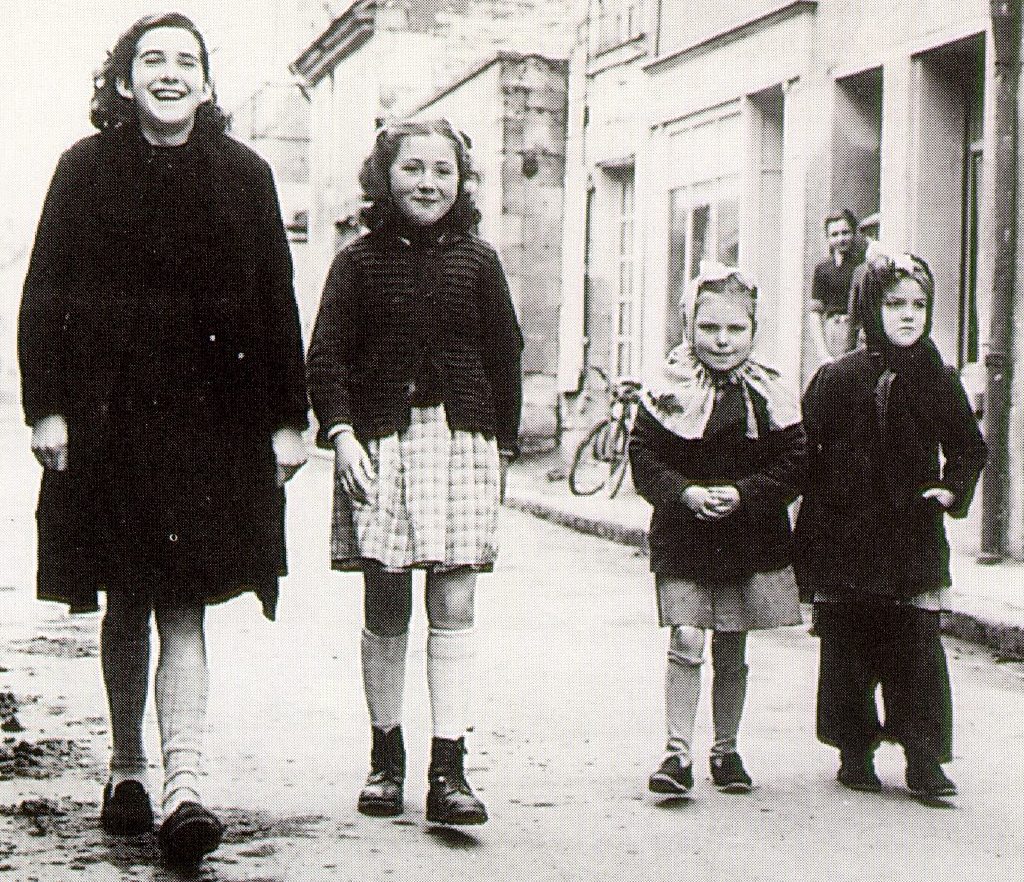 Whereas France was on the verge of civil war, within days, at the very moment these apparitions occurred on l’Ile Bouchard, the political situation was totally reversed! The impossible happened, all threats were removed and peace returned! « France does not know that it was saved by the prayer of these four children… »